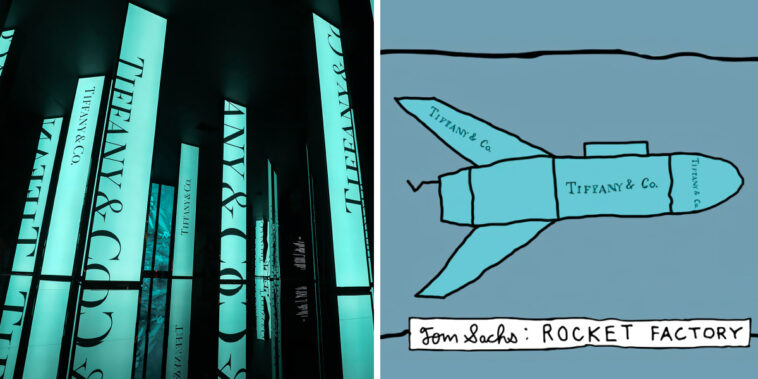 Another top brand has entered Web3. Earlier this week, Tiffany & Co. announced on Twitter that it had acquired a Tom Sachs Rocket non-fungible token. The Rocket NFT features “Tiffany & Co.” on the head, body, and tail.

Tiffany & Co. wrote in a tweet that it is “pleased” to announce its purchase of the “Okapi” Rocket, signaling its entry into the nascent NFT space. It also wrote that “the evolution of fine art collecting” has arrived and the future of NFTs is “bright.”

The Tom Sachs NFT project features rockets broken into three pieces: the head, the body, and the tail. Users can complete a rocket when they put together all three pieces. There can only be 1,000 completed rockets. As of now, the floor price for parts is 2.3 ETH, or roughly $7,800.

Tiffany & Co. paid 115 ETH total for the “Okapi” rocket, around $380,000 at the time. The company changed its Twitter PFP to an image of the rocket, the same as Budweiser did with another Tom Sachs rocket in 2021.

The Tiffany & Co. buy appeared to reinvigorate the market for Tom Sachs Rocket NFTs, with a few purchases seen after the news broke for around $20,000 a piece.

The fashion and beauty industries have been bullish on Web3. Just in the past few months, several companies have bought land, registered trademarks, or started campaigns to capitalize on the excitement of the metaverse. These companies include:

It is uncertain what Tiffany & Co.’s long-term plans are for the Web3 space, but they appear initially to be targeting non-fungible tokens, a space that has seen billions of dollars worth of sales since 2021. Other companies, such as Budweiser, Pepsi, and TIME Magazine, have gone down that route, with mixed results.

Probably the most prominent company to successfully integrate into Web3 is Nike. It integrated successfully by acquiring a native Web3 company and incorporating it under the Nike brand.

There’s no telling if Tiffany & Co.’s foray into the Web3 space will be successful, but there’s no doubt that the momentum behind NFTs continues to gain steam.