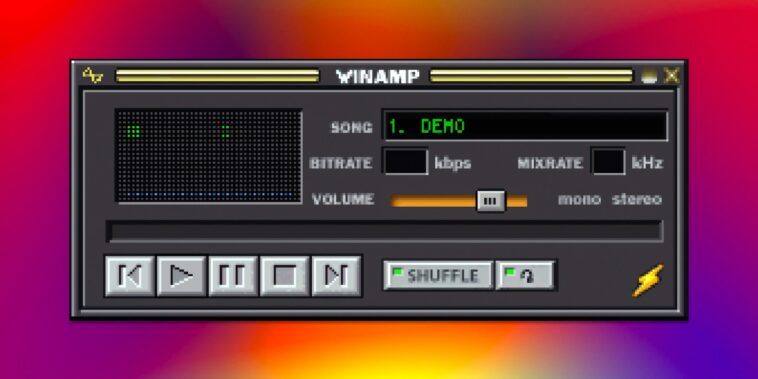 The auction and sales will take place on NFT powerhouse marketplace OpenSea, with the auction running from May 16th to the 22nd. According to Winamp, 19 of the art pieces will sell in editions of 100 and the remaining in an edition of 97. The total of art editions sold will be 1997, the year Winamp debuted.

Interested artists have until April 15th to submit artwork for consideration. Winamp has said that artists will receive 20% of the proceeds from the primary sale and 10% for any secondary sales. The company has also noted that the vast majority of the money will go to the Winamp Foundation, which will allocate it to charity.

Winamp has had its ups and downs since debuting as the leading media player in 1997. According to The Verge, it endured a prolonged shutdown before its current company revamped it as a mobile audio app in a broader relaunch this year.

If the Winamp foray into NFTs seems familiar, it might be because Nostalgia and Web3 have combined before. Two weeks ago, LimeWire, the old peer-to-peer file sharing platform, announced it was launching an NFT marketplace. It appeared like a stunning rebranding for a company that used to ignore copyright.

And while Winamp and LimeWire are the two biggest names that were seemingly destined to be historical footnotes before diving into Web3, other big-name companies have jumped in.

Microsoft has furthered its metaverse ambitions by acquiring Activision Blizzard. Facebook has rebranded as Meta (and will introduce NFTs to Instagram soon). A bevy of other companies has registered trademarks for the metaverse.

That said, Winamp’s foray into Web3 is not altogether with Web3’s ethos. While Winamp’s NFTs will follow a familiar format that today’s collections use — selling the non-fungible token while linking to the art — it will not distribute the art’s intellectual property.

Users who buy the Winamp artwork will not have copyright over it, and even the artists selected for the project will have to turn over copyright to Winamp.

Time will tell how successful the project is and whether it can overcome a minor bear market for NFTs. Perhaps some nostalgic NFT collectors will want a little piece of history.