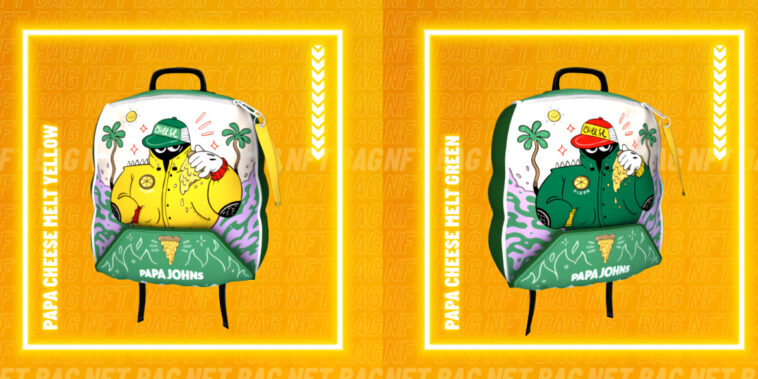 A heads up, pizza lovers —a top franchise is entering the metaverse. Papa Johns, known for its early role in Bitcoin commerce, is launching a set of 19,840 non-fungible tokens. They will take the form of “hot bags,” which Papa Johns’ pizza delivery drivers use to keep pizzas warm en route.

Jo Blundell, a vice president at Papa Johns, said that while NFTs are “hot” right now, not everyone knows where or how to get one. That’s why Papa Johns decided to take NFTs mainstream, for “meta-professionals,” pizza lovers, and more.

There will be nine different “hot bag” NFTs that users have a chance of winning. Two designers collaborated on them —Tom Hoff from Spain and artist Ash Sketch from London. For now, the NFTs will be available just to customers in the United Kingdom. There are plans to expand the campaign to include more countries, however.

Papa Johns created the 19,840 NFTs on the Tezos blockchain, which is more energy-efficient than Ethereum. To redeem the hot bag NFTs, users must create or have a Tezos wallet.

Papa Johns Has a Long History with Crypto — and Regulators

Papa Johns is widely known in the crypto world for its role in one of the earliest uses of Bitcoin as a payment method. In 2010, someone paid 10,000 BTC for two Papa Johns pizzas. Today, that 10,000 BTC would be worth roughly $400 million.

It also is known for running afoul with regulators in the United Kingdom. In 2021, Papa Johns promoted a contest where anyone who bought a pizza would be entered to win 1 BTC. However, U.K. regulators shut the advertising campaign down, saying it didn’t sufficiently educate the public about the dangers of investing in crypto.

Despite that previous incident, Papa Johns will push ahead with its NFT launch. It has an uphill road ahead of it: According to recent surveys, 42% of U.K. residents don’t know what an NFT is.

But its NFT drop will have a lot of company. In the past few months, several companies have jumped into the metaverse. Some like Gucci have bought metaverse land, others like Dolce & Gabbana have launched collections, and others like the New York Stock Exchange exploring plans to open NFT markets.

Even LimeWire, the former file-sharing site, is getting into the act, opening an NFT platform focused on music NFTs. While Papa John’s plan is undoubtedly interesting, only time will tell if it is successful.