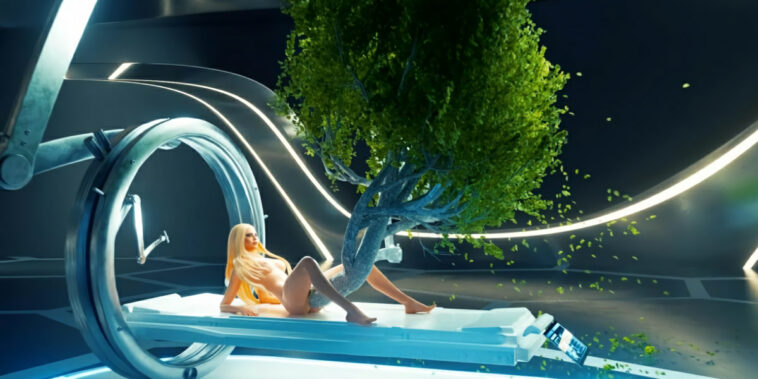 The NFT collection features three NFTs of a naked, CGI Madonna giving birth. After over a year of collaboration, the NFTs will be auctioned this Wednesday on the NFT marketplace SuperRare.

The videos of a CGI Madonna giving birth, although criticized for being bizarrely provocative, are meant to symbolize not only motherhood but the birth of “art and creativity” as well.

The three NFTs — “Mother of Nature,” “Mother of Evolution,” and “Mother of Technology” — offer different interpretations of motherhood, and like much of Beeple’s art, have been described as surreal and disturbing.

According to the project’s website, three charities will receive the proceeds from the NFTs. They include The City of Joy, Black Mama’s Bail Out, and the Voices of Children Foundation, which are focused on supporting Ukrainian children, incarcerated black women, and female survivors of violence, respectively.

MoonPay, a popular crypto platform, will also be donating $100,000 to each charity. This is not Madonna’s first foray into NFTs. Currently, her Twitter project is a picture of her Bored Ape Yacht Club NFT.

Madonna is Not the Only Pop Icon to Issue NFT Collection

Despite the recent dip in the market, NFTs have been hot all year. Not only are brands, companies, major banks, and even countries investing in NFTs, but superstar athletes, musicians, and other cultural icons have been releasing their own projects at a rapid pace.

Here’s some of the most recent news from Rarity Sniper related to celebrities and NFT projects:

The list goes on and on, but one thing is certain: Celebrities have recognized the benefits of investing in NFT technology while it’s still in its embryonic stages.

Only time will tell if Madonna and Beeple’s NFTs will be successful. But considering two of the most successful artists of all time spent a year collaborating on it, we’re going to go out on a limb and say there’s a good chance it will be.

For more information on the NFT drop from Madonna and Beeple, visit Madonna’s Twitter on May 11th at 3 PM or the NFT marketplace SuperRare.